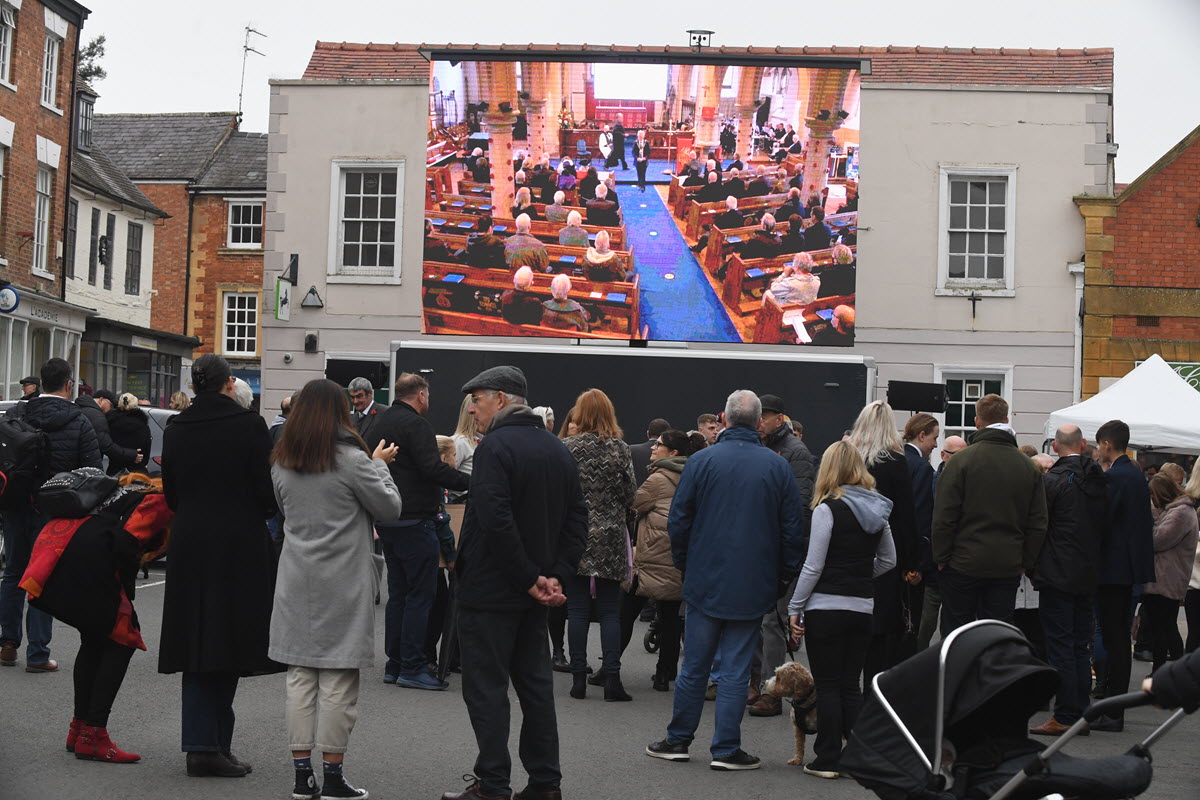 A Warwickshire town’s Remembrance Sunday service was able to reach far more people than ever before thanks to a big screen showing it live in the town centre.

Shipston-on-Stour Town Council hired a big screen to broadcast the service from inside the town’s church, St Edmund’s, which can only fit a few hundred people inside.

The screen was installed above Lloyd’s Bank in High Street, close to where the parade started its procession.

Those wishing to pay their respects but who could not enter the church due to its limited capacity were then able to stay in High Street and watch the service safely.

And plenty of people did so, with many returning to High Street after the wreath-laying at the memorial to watch the indoor service.

The use of the big screen coincided with the 100th anniversary of the Royal British Legion and the first ever Poppy Day.

The programme is managed by Shakespeare's England on behalf of Stratford District Council.

Cllr Ian Cooper, Shipston’s mayor, thought the big screen was a great addition to the service and meant turnout was a lot higher than in previous years.

He said: “We were so happy with what the screen brought to our Remembrance Sunday service this year.

“Turnout in Shipston is usually very good for Remembrance Sunday, but in the past we often had people hanging around outside St Edmund’s as they weren’t able to get inside. They had no way of knowing what was happening or when the service would finish.

“The big screen changed all that. It allowed residents to gather safely in High Street, watch the service and pay their respects in a much more inclusive way than what was possible before.

“We would definitely consider using the screen again in subsequent years – it worked really well.”

Mike Wells, chairman of the Shipston branch of the Royal British Legion, added: “Anyone wishing to quietly reflect during Remembrance Sunday should be able to do so, and the big screen allowed more people than ever in Shipston to watch the service.

“St Edmund’s is a lovely church, but its size means we cannot fit everyone in. But this year, having the big screen allowed more people than ever before to view the service. I think it was a great addition to the day.”

And Glyn Slade, Welcome Back Event Manager from Shakespeare’s England, said: “Projects funded through the Welcome Back Fund are supposed to attract people back onto the High Street, which is exactly what Shipston’s big screen did.

“It was fantastic to see so many people come out to watch the service on the screen and pay their respects to the fallen.”