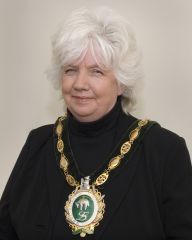 The month began with an invitation to an evening reception at Shire Hall,Warwick by the Chairman of Warwickshire County Council..This was a very interesting experience as we were also able to have a tour around the vast building ,taking in the all of the magnificent rooms,although looking at the old Magistrates Court and the underground cells was creepy,damp and cold!

Along with the Deputy Mayor Cllr. Ronnie Murphy, l attended the Mayoress of Stratford ‘At Home’ at Stratford Town Hall.This was a very decedent and delightful occasion when our best hats were worn---we even had our photos taken by some American tourists as we were going in.

It was a delight to be invited to a concert by Warwickshire Boys Choir by Shipston Music Society.It was both inspirational and joyous to witness such a talented choir of young boys

As a member of Shipston W.I. I was privileged to attend the historic occasion of their 90th Biirthday Celebration on October 3rd which was also attended by guests from Warwickshie Federation,Stour Valley W.I and Brailes W.I.I was very touched that the celebration cake had been made without alcohol so that l was able to have a slice!

We attended the A.G.M.of Warwickshire Young Carers at Warwick.It is good to know that young people who find themselves in this position have so much help and support during difficult times in their lives.

We have also represented Shipston at the ‘Civic Services’ of the Chairman of Warwick District Council and the Mayor of Alcester.

I look forward to welcoming all towns people to Shipstons Civic Service and Patronal Festival on Sunday 25th November at St. Edmunds Church at 10am.I would like to invite all recipients of the Anne Sankey Award to attend proudly wearing your medals.