Restrictions on public gatherings due to the coronavirus pandemic meant that long awaited plans to mark the 75th anniversary of VE Day on 8th May with a series of street parties had to be altered at short notice.

Fortunately, the whole community, determined not to let the sacrifices of the wartime generation be forgotten, hosted a town-wide stay at home street party. There was a fantastic demonstration of community spirit as people sat in their front gardens, enjoying the sunshine and chatting to their neighbours, with many also decorating their houses to mark the occasion.

At the break of dawn, Dan Scobie, then Mayor of Shipston, Sheelagh Saunders, then Deputy Mayor, and David Kernohan, President of the Shipston-on-Stour branch of The Royal British Legion gathered in the Gyratory Garden. They placed bouquets of flowers on the memorial sundial that was erected in 1995 to commemorate the 50th anniversary of the end of the Second World War. 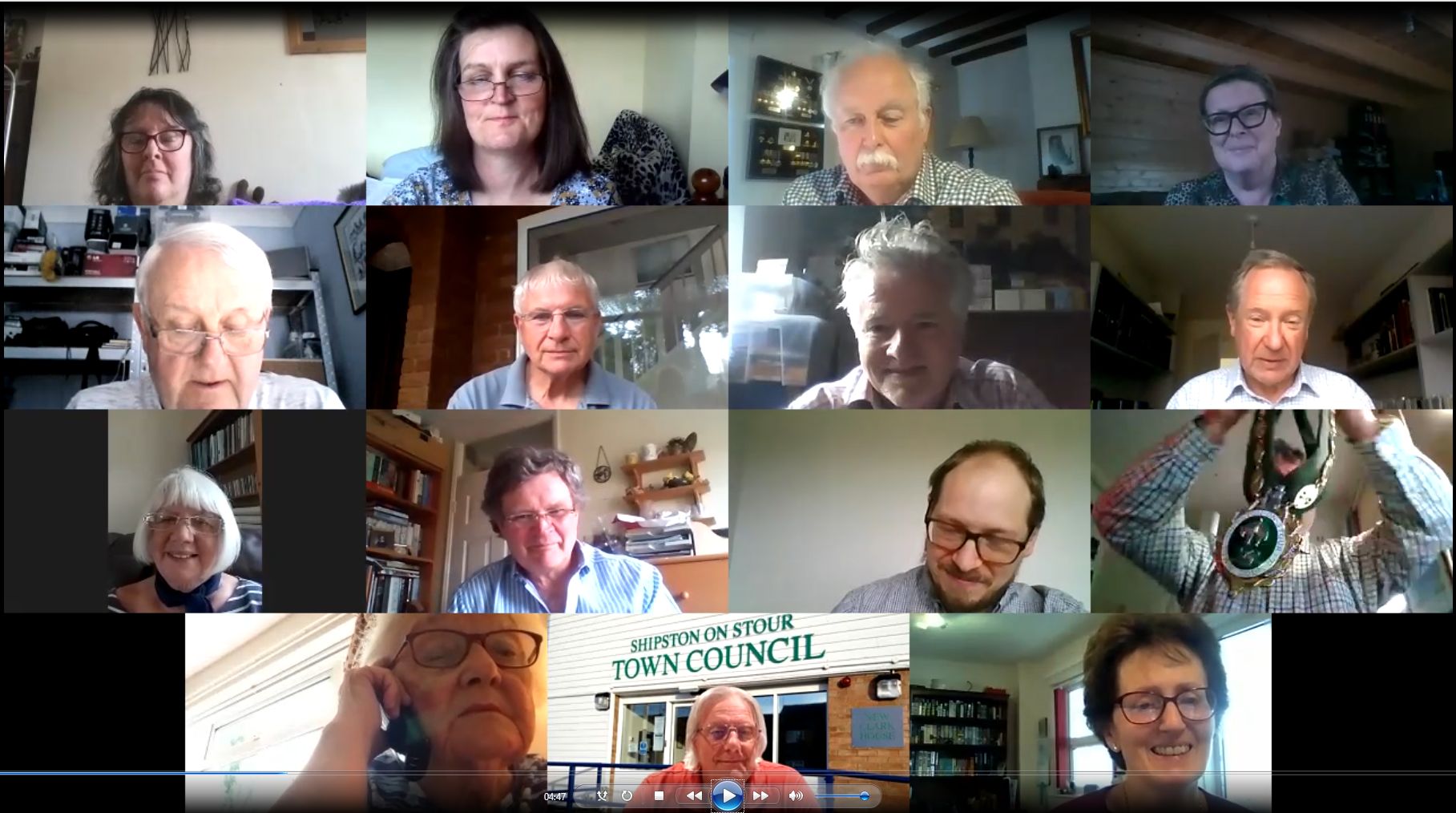 The Town Council has continued to operate under a scheme of delegation that allows the Clerk to conduct business after consulting with Councillors. However, after several test sessions on Zoom to allow Councillors to experiment with the technology, future council meetings are now planned to be hosted on the platform until physical meetings can resume, allowing for democratic decisions.

The first ever virtual Annual Town Council Meeting in Shipston took place at 7pm 18th May, with Councillors gathering to conduct the election of a new Mayor and Deputy Mayor.

Dan Scobie as the outgoing Mayor opened the meeting by requesting that all participants remain on mute until called to speak, and that all contributions should be addressed to the Chair as would be normal procedure. Voting took place through the raising of hands, which were then tallied.

Shipston’s new Mayor and Deputy Mayor were elected at the Annual Town Council Meeting on 18th May. The Mayor Making process was somewhat unconventional, being conducted on Zoom, however this important civic event was still able to take place. For example, Councillors voted to receive verbal acceptances of office, with the essential signed paper copies to follow later.

Cllr Sheelagh Saunders was the sole nomination for Mayor and received unanimous support. Dan Scobie, as the outgoing Mayor, then invited the new Mayor to recite the Declaration of Acceptance of Office. Following this he symbolically removed his chains of office, placing them out of shot of his webcam.

Mayor Sheelagh Saunders then addressed the meeting, thanking Dan Scobie for his service as Mayor, praising his frequent willingness to “go above and beyond” and that he had proved to be a “steady hand on the tiller” during the challenges of recent months.

To ensure the hospital is the best it can be for residents of Shipston-on-Stour and the surrounding local communities we have been working closely with  the League of Friends of Ellen Badger Hospital, Patient Participation Groups, and South Warwickshire Clinical Commissioning Group, as well as Shipston Town Council, Warwickshire County Council, Shipston Care, Shipston Home Nursing and other local partners and organisations.