With Remembrance just passed, not long prior, on 23rd October was the 80th Anniversary of the start of the Battle of El Alamein in 1942. A turning point in WW2 when the British Eighth Army defeated the German Afrika Corps. The Warwickshire Yeomanry participated, an armoured regiment in the 9th Armoured Brigade, 2nd New Zealand Division.

There were commemoration ceremonies in Egypt to mark the occasion and the British Army Band Catterick took part. The Band's Sergeant Major WO 2 Alastair Smith is the son of John Smith well known in Shipston today as a leading member of the Town Band. John's father Bert was in the Warwickshire Yeomanry in the battle in which 19 troopers from the regiment were killed. Quite a few Shipston men served in the Warwickshire Yeomanry during WW2. Those men whose names are known are in addition to Bert, Ben Bland, Harry Parry, Pete Drinkwater, John Vokins and Monty Sumners. The Shipston troopers were not among those killed in action. Sadly, Ben Bland's younger brother Ronald was a casualty of the war killed when the merchant ship he was serving on was torpedoed in 1942. He is named on the Town War memorial.

There is no doubt that the Warwickshire Yeomanry had a strong association with Shipston due to the town's men who served in its ranks. Alastair Smith visited the Commonwealth War Graves Commission's cemetery where the fallen in the El Alamein battle are buried. He found the grave of one of the 19 Warwickshire Yeomanry troopers who fell and placed upon it his medals and those of his grandfather Bert. A fitting touch. 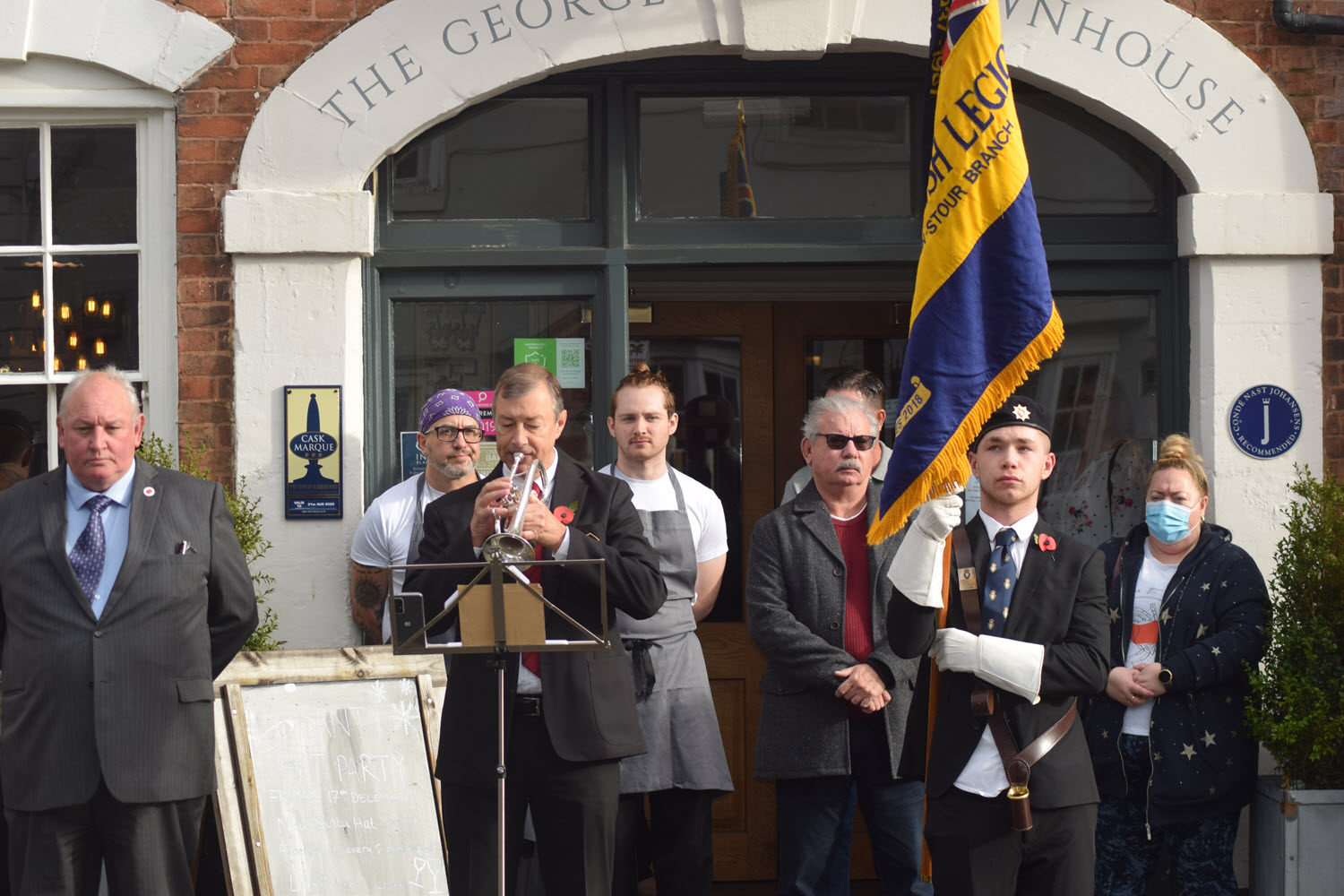 At 11.00 a.m. on Friday 11th November the centre of Shipston fell silent as the people of Shipston and the British Legion gathered to remember the fallen from both World Wars and conflicts since.

The Last Post and Reveille was sounded by cornet player Bob Pitts of Shipston Town Band.

At 11.00 a.m. on Sunday, there was not a sound to be heard apart from the odd leaf fluttering to the ground, as the people of Shipston remembered the fallen from the two great wars and conflicts since.

Their names were read out by the prefects from Shipston High School before Last Post and Reveille was sounded by Bob Pitts the solo cornet of Shipston Town Band, who as usual had led the parade from the High Street to St Edmunds Church.

The British Legion and the representatives of local government and voluntary organisations laid their wreaths at the memorial before the service concluded in St Edmund’s Church.

The parade reformed after the Service to process back to the High Street where the Town Band performed a period march Erimus in standing formation after the parade had been dismissed.