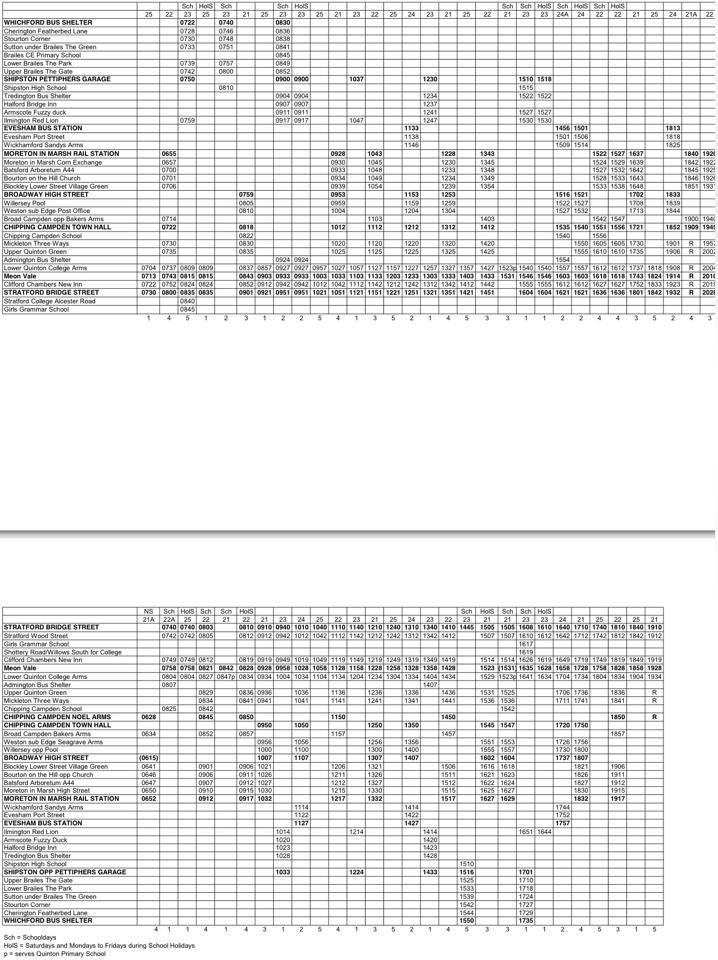 We've had this email from the County Council about changes to bus services in and around Shipston. Please share it so that bus users can find out about it as soon as possible:

With effect from Monday 1st September 2014, there will be major improvements to the Johnson’s commercial bus services operating between Stratford, Quinton, Chipping Campden, Broadway and Moreton-in-Marsh. This is in connection with the new residential development at Meon Vale on the B4632 south of Lower Quinton. I attach a working copy of the new timetable and official versions will be distributed locally in advance of the changes and added to the Council Public Transport web pages.

On weekdays, for the greater part of the day, Meon Vale will receive a half-hourly bus service into Stratford. The bus will initially follow a short circular route in the development, dependent upon the roads being ready for use. Lower Quinton and Clifford Chambers will be served en route benefiting both communities with significantly more frequent buses (increasing from every hour to every half hour).

There will also be additional journeys between Stratford and the popular tourist destinations of Chipping Campden and Broadway.

A new service known as the ‘25’ will be introduced starting in Stratford that will provide a direct link between Clifford Chambers, Quinton and Evesham via Broadway three times a day.

Service 23 is maintained at the current level through Ilmington, Armscote and Halford to Shipston or Stratford with some minor timing changes. This service is provided without financial support from the Council and the operator has expressed concern over the low usage (for the month of June there were 11 from Ilmington and 20 from Halford towards Shipston with 5 from Halford and 10 from Ilmington towards Stratford.). The service will continue to be monitored over the next year.

Due to the scale of this revision, minor changes to departure times will affect most journeys.

Should you have any questions regarding this please don’t hesitate to contact me. 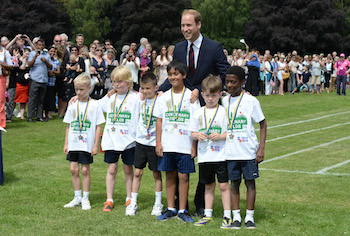 The Shipston Branch of the Royal British Legion is working with Shipston Town Council to dedicate an open space in the town to be come a Centenary Field, in recognition of the 100th anniversary of the First World War.

The Centenary Fields project is a Legion UK-wide initiative aiming to secure recreational spaces in perpetuity to honour the memory of the millions of servicemen and women who lost their lives in World War I.

Subject to discussions with Stour Valley Lions, Shipston Town Council has identified the Gyratory Garden to be Shipston’s Centenary Field.

Mayor, Philip Vial, said: “The Gyratory Garden is a central open space, well maintained by the Lions, which is why we have chosen it to be our Centenary Field. However, we recognise there are other recreational spaces around the town so if residents want to put forward alternatives, we would be happy to consider them”. Residents are invited to contact the Town Clerk on 01608 662180 or clerk@shipstononline.org.uk with suggestions before the next council meeting on the 8th September.

Shipston lost 36 servicemen in the war, the first of whom died in March 1915. From March 2015, the Shipston Forum will run an article in memory of each local soldier who died on the centenary anniversary of their death. Richard Adams, Chairman of the Shipston Branch of the Royal British Legion, suggested the idea which town councillors were only too happy to support. “I’m delighted the town council will be supporting this idea which will allow residents to find out a bit more about each of the Shipston men who made the supreme sacrifice during the First World War.” Said Mr Adams.

For more information about the work of the Shipston Branch of the Royal British Legion, please visit www.britishlegion.org.uk/branches/shipston or find them on Facebook. 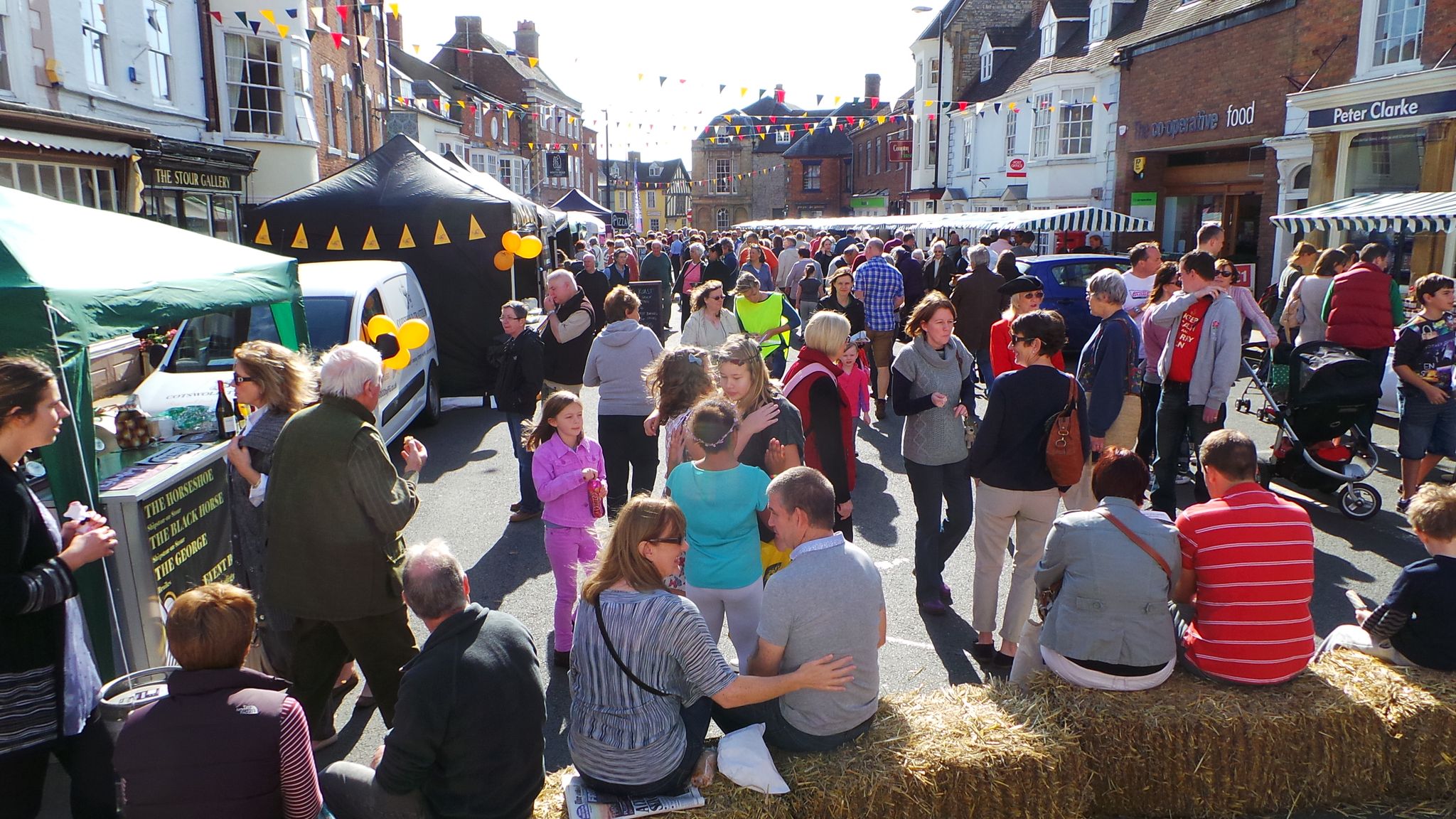 The Shipston Food Festival is celebrating Shipston’s woolly heritage in gastronomic style with the launch of its Sheep Pie competition.

The main category in the cooking competition will be the creation of a sheep pie to serve four people. There are no restrictions on other ingredients, the shape or the style of the pie, as long as lamb plays a leading role. Chairman of the festival, Dan Scobie, explained: “Shipston owes a great deal to sheep. The wool industry is a vital part of our history and Shipston itself translates as “Sheep Wash Town”. We’re combining that history with the Great British Pie to make the perfect cooking competition. Not surprisingly, we have a number of willing judges lined up!”

With less than a month to go to Shipston’s Food and Beer Festival weekend, the organising committee are calling on all bakers and jam makers to take part in the event’s cooking competition.

With youngsters having their own categories adults will not only have the pie championships to enter, but will be encouraged to fight it out in the bread, jam and chutney challenges too. Keen bakers will also be tasked with making a cake from a choice of two set recipes.

Thanks to support from local businesses Shipston Food Festival will take place over three days, beginning on Friday 19th September with the Beer Festival at Shipston Rugby Club. On Saturday 20th, entries will be invited into the baking competition and the all important judging will take place.

The Town Square will host the main event on Sunday 21st, with the High Street and Market Place expected to be full to bursting with gourmet goodies. The event is being sponsored by Hook Norton Brewery, Cooperative Food, Shipston Card,  Taste of the Country and KMS Litho Print.

Chairman, Dan Scobie, said: “We are very grateful to all our sponsors who have helped make this year’s festival possible. We are really excited about the event and we look forward to welcoming as many people as possible throughout the weekend.”

As well as stalls, there will be live entertainment and a fundraising raffle with fantastic prizes. The best advice? Arrive hungry! 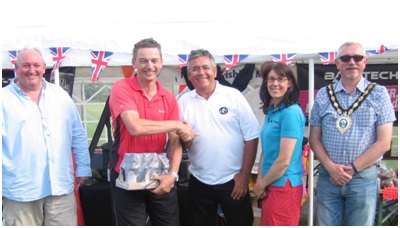 Shipston Angling Club’s annual Fishing and Entertainment Festival weekend, Fish’n’Frolics, was a great success, with a number of new members joining the angling club and a fun time being had by all.

Record numbers of children and young people queued up to try fishing on the river with licensed casting coach, Angus Campbell, with many given free fishing equipment donated by sponsors Bait-Tech, The National Fishing Month and The Environment Agency.

Visitors flocked to the Environment Agency’s Marquee to see a large tank full of coarse fish and live video link into the river showing fish swimming by. In addition to the fishy fun, children enjoyed fairground rides, a giant slide and trampolines, while parents tried their hand at Laser Shooting and maggot racing.

The Sports Club and restaurant marque both reported record attendance numbers. Friday night’s main band ‘Zool’ was supported by Chloe Hanks and Chris Wright. Saturday night’s live band J.E.E.P supported by local band ‘Me, Him & The Others’ went down very well. The closing evening on Sunday featured a spectacular sound and light display by Shipston based company, Clearsound Productions, set to the sound of Stratford band ‘Off The Grid’.  Hundreds of people made the most of the warm evening and the dancing and chatting continued until late.

The Fish ‘n’ Frolics Festival was attended by 33 competitive anglers. The overall winner was Andrew Whieldon who came first on two days and second on another.

The river matches produced a number of double figure weights over 10lb whilst Aston Magna Lakes produced 40 to 50lb weights for the top anglers.

The Festival was launched the previous weekend when four Duck races were held at Willington Bridge. The launch event was well supported by the local community and organisations, resulting in £440 being raised for Shipston Home Nursing and Fight for Sight. Mayor Philip Vial presented the cheques on the Sunday of the main festival.