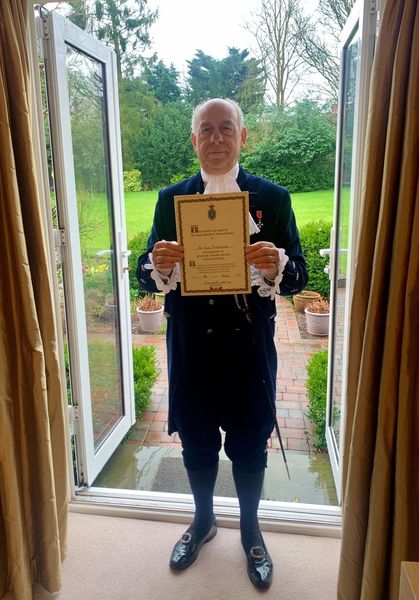 Joe Greenwell, the High Sheriff of Warwickshire presented three High Sheriff awards to Shipston residents during the Town Council meeting on 8th March. This included a posthumous award to Dr Sue Pritchard, which was accepted on her behalf by her husband Michael Booth, who expressed his gratitude for the outpouring of prayers and love from members of the community following the passing of his wife.

Shortly before Sue passed away, she was recognised with a Fellowship of the Royal College of GPs. She was nominated for a Fellowship for her care and advocacy of the most disadvantaged patients; her ability and knowledge of the networks of statutory and voluntary sectors which enabled her to resolve or improve some of the most intractable problems. She also led a community initiative - DASH (Drugs Action Shipston); she was the lead clinician in setting up Dementia care in the practice, including the community Dementia cafe, to support Dementia sufferers and their carers. The nomination also referenced her involvement and commitment to teaching; for supporting and developing staff members at the medical centre, as well as caring for them in a pastoral sense.

More recently, Sue had been instrumental in setting up Walking for Health – a fore-runner of the health walks that exist around the county today. Sue was passionate about encouraging movement, exercise and mindfulness and was instrumental in creating Activ08 which also occurred in 2011, to promote the various sports clubs and societies in the town and the importance of exercise in retaining our wellbeing.

Linda Cornock received the Award in recognition of her contribution to the community of Shipston on Stour, using her knitting and needlework skills having set up the Shipston Knitting and Crochet Guild. Over many years, she has knitted beautiful Christmas scenes for the Rotary Victorian Christmas evening. She has knitted sheep to embellish the annual Shipston Wool Fair, ‘yarn bombing’ the town with countless other objects to enliven Shipston events. She has knitted 100’s of poppies to decorate St Edmund’s internally and externally in the dramatic waterfall of poppies that cascades from the tower for Remembrance Sunday.

Most recently, Linda has dedicated her time to making masks for the community during the pandemic. She has raised the phenomenal sum of £2000, shared between Shipston First Responders and Shipston Home Nursing.

Charlotte Haines sprang into action, joining the newly created Facebook group, Shipston on Stour Isolation Support Group. This was swiftly renamed Shipston SOS so that the group could continue to offer their support to the community after the pandemic. Possessing outstanding organisational skills, honed by her time serving on and then chairing the Shipston Proms committee, she met with the Town Clerk, the Town Mayor and others to formulate a cohesive plan for the initial logistics and set-up. She became the hub of the group and devised a zone system to ensure that every household was covered. This initiative covered the whole of Shipston and was extended to the villages of Honington, Tidmington, Burmington, Darlingscote and Blackwell. The zone system was used to coordinate the volunteers so that offers of help could be specifically targeted to those in need. She also forged links with the Self Isolation Groups in Brailes, Long Compton, Halford and Tredington. In addition, Charlotte liaises with local social housing providers, Age UK and the local hospitals and food bank.

About the High Sheriff

The High Sheriff is the Queen’s representative in the County for all matters relating to the Judiciary and the maintenance of law and order; much of the High Sheriff’s year is therefore spent supporting and encouraging the voluntary and statutory organisations who work in this area. In Warwickshire, this means involvement with the Crown and Magistrates’ Courts, in addition to the Police, Prison and Probation Services.

Traditionally, High Sheriffs look after visiting High Court Judges to the county, although such visits are now rare in Warwickshire. However, the High Sheriff does make awards to those who, in the opinion of the Judges at a criminal trial, have been active in the apprehension of certain offenders.

The Office of High Sheriff is apolitical and as such the High Sheriff is in a unique position to be able to bring people together within the county and to support the enormous contribution made by the emergency services, the armed forces, local authorities, church and faith groups and the voluntary community.

As part of their ceremonial duties, the High Sheriff assists the Lord Lieutenant of the County with Royal visits, is the Official Returning Officer for parliamentary elections and has responsibility for proclaiming the accession of a new Sovereign.

The Stour Health and Wellbeing Partnership is seeking to recruit and develop approximately 16 local health champions. They will be tasked with raising awareness, directing people to local health services and providing help to those who need a little extra support.

These volunteers will be positive role models, supporting people to make positive choices regarding their own health and wellbeing. They will work as part of a team to support people from a wide range of backgrounds. All volunteers will receive access to training and a level 2 qualification from the Royal Society for Public Health.

The training and DBS completion is free of charge, but a commitment of 3 to 4 hours per week is required for a minimum time frame of 6 months. Volunteers will be supported by the organisation, Volunteering Matters, for the first year.